Our role as an academy is to advise and to provide information on the wide possible range of careers and higher education. At Harris Academy South Norwood, we know, however, that “teenagers have a weak grasp of the availability of jobs - and that large numbers naturally aim for jobs that are in short supply.” We agree with researcher, Emma Norris, that:

“students are not fully aware of the diversity of jobs available in different sectors. This leads them to develop aspirations that are neither determined by their ability nor based on a comprehensive understanding of the types of jobs available.”

There are 10 times as many people aiming for jobs in the culture, media and sports sector than there are jobs likely to be available.

And even though almost a quarter of jobs are in the distribution, hotels and restaurant category, only about one in 40 youngsters are considering careers in these industries.

Fewer than one in 30 young people are considering jobs in banking and finance, even though one in five jobs are expected to be in this sector.

The BBC have reported on the latest research into careers aspirations of young people. They reported the findings that “there is a "massive mismatch" between young people's career expectations and the reality of the jobs available, a major survey of teenagers suggests.

“It highlights the need for better careers advice, says Nick Chambers, director of the Education and Employers Taskforce, which published the survey.

The study also indicates teenagers have a very weak understanding of potential earnings for different types of jobs.

There is a serious "information gap" for teenagers, says Mr Chambers.”

Harris Academy South Norwood believes like many in industry that we have to do more to show young people the "requirements and opportunities" of the world of work. 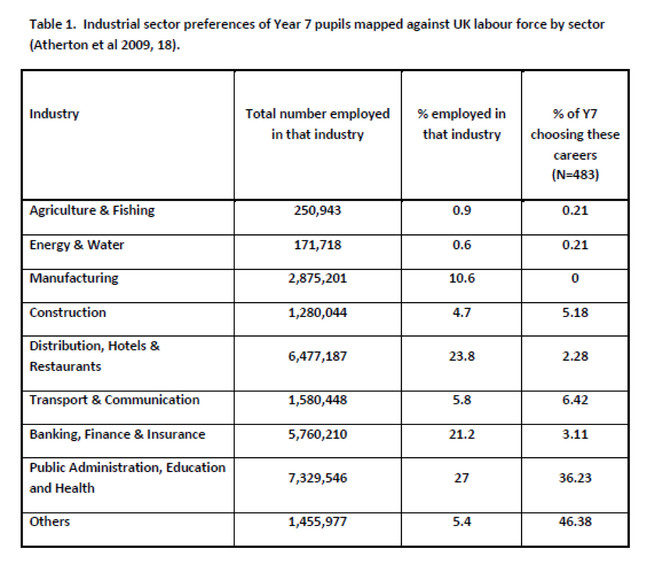