Get the app
Harris Academies
All Academies in our Federation aim to transform the lives of the students they serve by bringing about rapid improvement in examination results, personal development and aspiration. 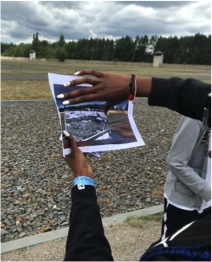 To mark World Genocide Commemoration Day this December it feels apt to share some of the ways students at Harris South Norwood have engaged with this tragic topic. Since becoming a Quality Mark school for Holocaust Education in October 2018 the task has been to deepen students’ understanding of the complexity of genocide and to seek ways to fight against prejudice and intolerance in all walks of life.

Some of our students have made this a personal mission. On Holocaust Memorial Day this January two of our A-Level students, Stephanie and Louis, delivered stirring speeches at Croydon Town Hall. They spoke eloquently of their experiences on the Lessons from Auschwitz (LfA) programme and the dangers of inaction of the global community in the face of ongoing crises in Sudan and Syria. Our most recent cohort of LfA students went one step further by designing a lesson to teach to Year 9 using real photographs and survivor testimony for added authenticity. The reception from the students was mature and thoughtful. One Year 9 student described how the vivid descriptions provided by the Sixth form students helped her to “visualise what it might have been like”, whilst others spoke of how they wanted to see Auschwitz for themselves. 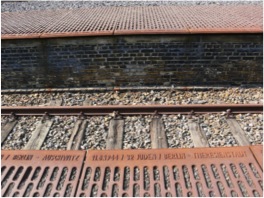 Though not quite the same, thirty of our Year 10 students did something very similar on a summer visit to Berlin and the concentration camp at Sachsenhausen. Using some of the pedagogical techniques espoused from the UCL’s Holocaust Beacon School programme, students’ again used photos to make sense of their surroundings and position themselves in the concentration camp. The photo attached shows one of our students holding up a photo of Sachsenhausen concentration camp from the late 1930s against the backdrop of the modern camp today. Not only did this drive home the stark reality of camp life, for one student it confirmed the horror of Nazi rule, which until this point she had “only been able to imagine” and “not fully understand”.

This was made all the more poignant by the later trip to Gleis 17, a now disused station in West Berlin used to transport Jewish prisoners primarily to Auschwitz but some also to Sachsenhausen.

The importance of recognising genocide as part of a wider process involving multiple actors has been a key focus of the current curriculum provision to Year 9 being taught this term. Based around Gregory Stanton’s model, the 10-stages of genocide, students’ complete a comparative study of genocide, exploring the Holocaust, Cambodia and Rwanda. 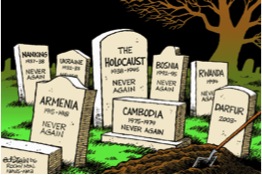 It remains to be seen what our students from this cohort will take from this study. However, one thing is for certain. At a time when the calls of ‘Never Again’ that first emerged after the Holocaust and that continues to fall on deaf ears in some corners of the World, on World Genocide Commemoration Day, Harris South Norwood remembers.