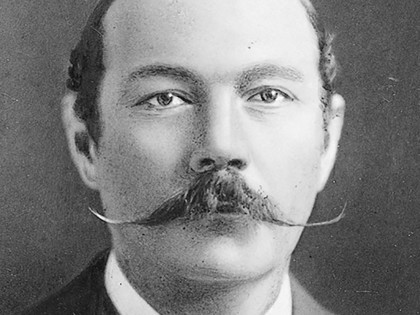 Sir Arthur Conan-Doyle was a British writer, who created the character Sherlock Holmes. Originally a physician, in 1887 he published A Study in Scarlet, the first of four novels and more than fifty short stories about Holmes and Dr. Watson.

From 1876 to 1881, Doyle studied medicine at the University of Edinburgh Medical School, including periods working in Aston, Sheffield and Ruyton-XI-Towns, Shropshire.

Doyle struggled to find a publisher for his work. His first work featuring Sherlock Holmes and Dr. Watson, A Study in Scarlet, was written in 3 weeks when he was 27 and taken by Ward Lock & Co on 20 November 1886, giving Doyle £25 (£2700 today) for all rights to the story.

While living in Southsea, the seaside resort of Portsmouth, Doyle played football as a goalkeeper for Portsmouth Association Football Club, an amateur side, under the pseudonym A. C. Smith.